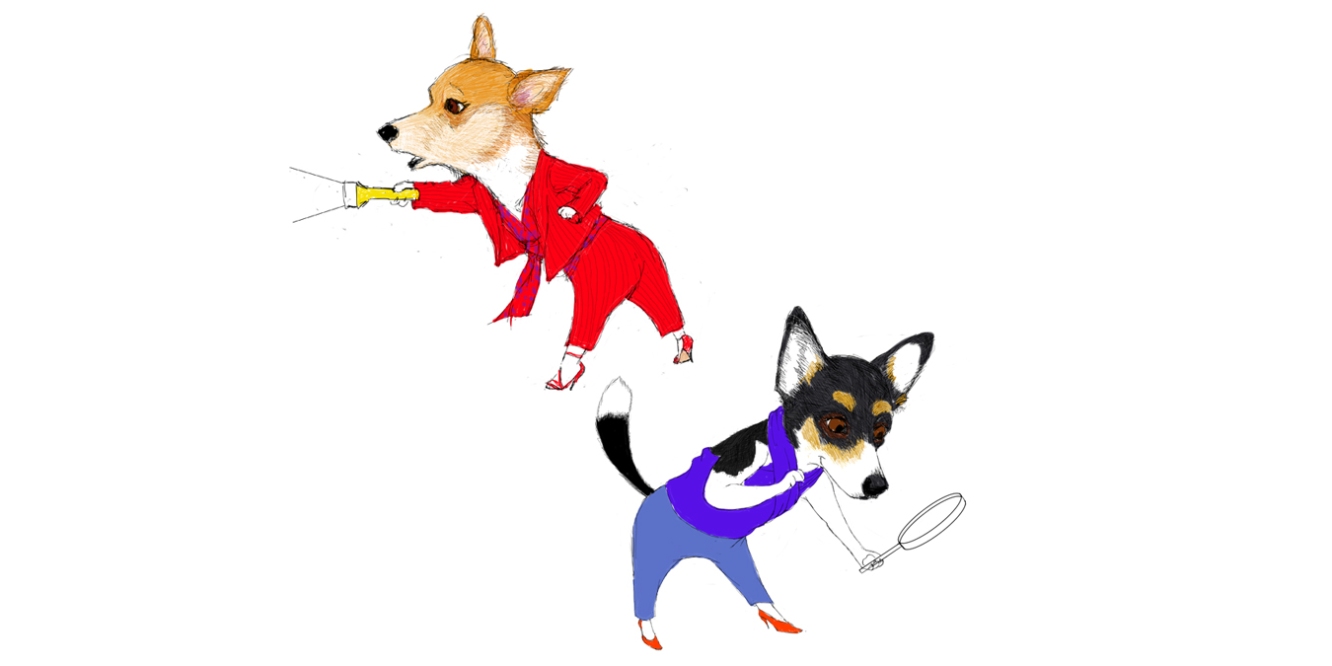 Furry girl detectives in the mystery of the missing ball.

After having discovered a forlorne Elly (“innocent” looking black lab very good girl friend) looking for her beloved orange ball, amateur sleuths Mabel  (killing in a little number by Julien Macdonald (in his words) “modernist glamour” with origami tailoring from the London Spring 2012 runway) and Stormy (in Blumarine – romantic in bold colors and unique print motif, from the Milan 2012 Spring Fashion Week – shoes from the D&G collection) set about to find out exactly what happened.

On the morning the ball was discovered missing, Gus(whom Stormy absolutely adores and wants to bite his face) was overheard arguing with someone, most likely Sergio – (a very handsome golden retriever – probably the most handsome dog in the park), or Moose a well known troublemaker Yorkie.  Afterwards, she seemed quite distressed and, apparently, made a new poopsy — which no one can find. She ate a little sticky and retired early to her spot with her other better sticky. That was when the ball in question (orange with cute blue baseball markings) was discovered missing.

Following much sleuthing and looking about Mabel, in a Salvatore Ferragamo Double-breasted wool jacket in a pinstripe pattern (Massimiliano Giornetti – head designer wanted to take those at the Salvatore Ferragamo show on a journey to someplace hot, steamy and tropical and Mabel wanted to go along!) and Stormy (working a Yves Saint Laurent from the Paris spring 2012 fashion week – silky halter tops in jewel tones tucked into cropped trousers.) found traces of slobber and leaves stuck to the bottoms of their very fashion forward shoes.  This leads them to several suspect so they decide to sit down and pontificate the evidence. It also gives them a chance to have a little snacky of donuts and a cup of, um – we’ll call it tea (everyone knows they are secret drinkers!)

Stormy, in the cake dress (yes cake and she ate it  all later in the day) by Just Heavenly Bakery from the London Spring 2012 Fashion Week points out that Enzo was sitting on his bench at the time chewing on his purple ball and making out with gawd knows who as he is want to do, Timothy the really big Irish wolf hound ( they say that the Irish are supposed to be full of wit and whimsy but Timothy never finds anything funny and appears quite the grump) was lurking nearby.  Also, Julie the boxer mix who would probably take the ball just out of spite, Calvin, cute but big trouble maker chewing on everyone’s’ head and all and Carmel – who you really have to keep your eye on because she’s always getting in your business and sneaking up to steal the balls – especially the squeaky ones.

Mabel, wearing cropped pants with nice toppy – Van Gogh, “Starry Night” inspired  by the Mulleavy sisters of the Rodarte house points out that Calvin had to leave earlier so it couldn’t be him and Julie had already gotten in trouble so her mommy had made her go to the horrible fenced in place with all the dust, so it couldn’t have been her. Leaving Carmel the mini Akita with really great fur, Enzo and Timothy as the prime suspects.  Carmel is  known to have never liked an orange ball – probably because she’s orange and was playing with the very crazy Lola (a “party” doodle) which means it most likely was Enzo or Timothy – heaven help us getting the ball back from either of those two!

As it turns out Enzo, distracted by one of his new girlfriends scratching his ear in just the right spot and all three balls dropped right out of his mouth! No orange ball was found. Timothy was busy eating treats when Mabel and Stormy who had finally woken from their stupor – oops I mean nap and found Timothy wasn’t sitting on the bally ball after all.  Mabel just happened to look over and saw that the ball was right behind Elly’s tail and wasn’t even missing at all. Go figure!